Cabbage is one of those vegetables people tend to avoid. The cabbage soup diet springs to mind…and then springs straight onto your face in the form of utter disgust. Yup. It’s gross. BUT NOT in this recipe – this is cabbage as you have never seen it before. Delicious, crunchy, sweet and wholesome: this is the best coleslaw in the world.

It may take a while to make but you can blame that on the food god that is Ottolenghi. I have nothing more to say on the matter. JUST MAKE IT! 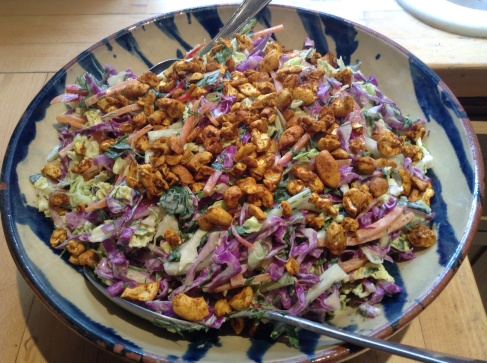 Heat the oven to 160C/320F/gas mark 2½. In a large bowl, mix the carrots, fennel and two tablespoons of the lemon juice. Set aside for 20 minutes, drain in a sieve over the sink and leave to strain.

You can use a food processor with a grater attachment for this, but it won’t be as pretty!

For the spiced nuts, place the cashews, turmeric, cumin, paprika, sugar and an eighth of a teaspoon of salt in a small bowl . Stir a tablespoon of water through the mixture so that the spices cling to the nuts. Place on a baking tray and roast for 10-12 minutes until golden and crunchy. Remove and set aside to cool.

Return the strained carrots and fennel to the bowl, add the cabbage, radicchio, red pepper and chilli, and stir well.

For the dressing, whisk together the yoghurt, mayonnaise, remaining lemon juice, mustard, honey, olive oil, a quarter-teaspoon of salt and an eighth of a teaspoon of white pepper. Pour this over the vegetables and mix well. Add the herbs and spiced nuts, stir to combine and serve.

21 May This entry was published on May 21, 2013 at 9:00 am. It’s filed under Food, Recipes and tagged Bon Appétit, Cabbage, Cabbage Soup Diet, Cashew, Coleslaw, Cook, Food, Fruit and Vegetable, guardian, Ottolenghi, Recipes, Strained yogurt, Tablespoon. Bookmark the permalink. Follow any comments here with the RSS feed for this post.

One thought on “Superior Cabbage”